Sometimes I forget how much of me is music. I end up away from it. and I think, “what am I doing?” I’m listening and following. after the thing I love more the all other.

Or lose sight of them.

So many incredible things have come from me be a part of this magical musical journey.

I’m just out chasing my dream. Following my music. and I land a job working for one of my hero’s.

and he brings me along to meet all these other people I love. It’s NUTS!!!

I got to stay at his condo for the week. I was riding MARTA and exploring all over atlanta. 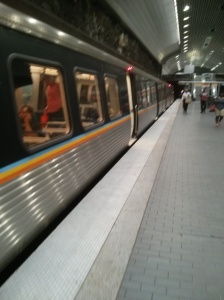 I got to go to the studio while he was recording promos for “The League” on FXX. COOL as shit. the guy is a PRO with this voice over action. Incredible to watch.

Not to mention I got to have some BAD ASS BARBECUE at Fox Brothers AND Pig n Chick.

It was great to be out and about exploring the world. One of my favorite past times.

I mean, I met Grant Imahara, life long hero, on my way to the bathroom… 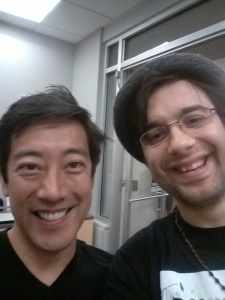 I’m making all sorts of cool friends. Here’s my buddies from “The Guild.” Awesome guys who are always good for a dinner invite! 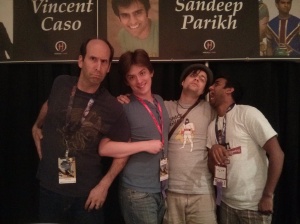 and the zombie who ate Laurie on “The Walking Dead.” 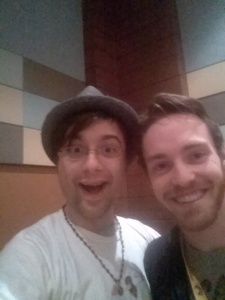 One of my favorite random meetings of the con! He was just a fan in line to meet my buddy Space Ghost, and we got to talking and it turns out he was the “Walker” that ate her! SUPER COOL!!!

NUTS. JUST NUTS-O.
and all because I’m pursuing the music I love so much.

But I am always thankful. ALWAYS.

Check this out. Sam Huntington from “Being Human”. AWESOME GUY

and our section mate and killer voice actor Mike Mcfarland. This guy get’s the award for most helpful and biggest class act at the con 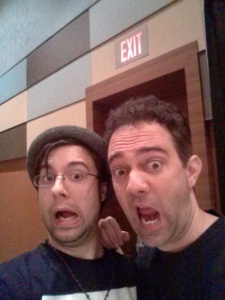 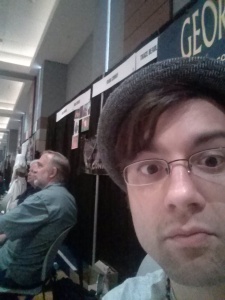 and of course I got to catch up w/ Joel Hodgson and Dana Snyder. Up at the secret bar at the top of the hotel .

Here’s my view from the table. at the workplace. 🙂 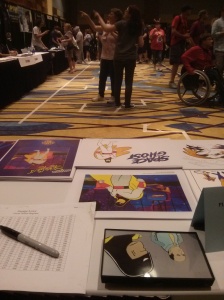 So there’s the bragging portion.

Did I mention Atlanta is beautiful? Ivy everywhere. The traffic sucks ASS, but man, there are some parts that are just so pretty. I did a lot of travel on foot and was DEFINITELY enjoying the weather. I even got COLD at night??!?!
I met so many cool friends who work for the con as well. All the volunteers were awesome.

and George (Space Ghost) even brought me up during his panel and let me plug the record (which I SWEAR to you is a real thing. It’s just taking a long time!) before spitting water on me.

I’m not sure what the official total was on attendance, but there were a BUTT LOAD of people there. 70k maybe? and I saw some just KILLER costumes.

Oh, AND we got dissed by Jeri Ryan! hahahaha One of the highlights of the con. She gave us the good ole fashioned wave off as her handlers refused to let us in the freight elevator that can hold 20 people. they were 3 deep….. guess she needed the extra room for all that ego!

OH!!! I forgot to mention I met Ralph Macchio !!! He hooked me up w a signed picture for my wife for her birthday. Thanks Ralph!

And this is just the beginning. I have all sorts of cool stuff in the pipe coming up. Things I need to do and get done.

All because I’ve been chasing this crazy music dream of mine.

Follow your heart, kids. It won’t steer you wrong