You know, I have no idea. I’ve been doing this for a while. and I still haven’t figured it out. I just wrote one.

I’m not what you call a prolific writer, hell, far from it. I have a friend in Nashville, a fella named Jordan Eastman, who told me he writes ten songs a week. TEN SONGS A WEEK.

To me, that’s crazy. I don’t even write ten songs a month. Or ten songs every 6 months probably. ( although I bet I do at least ten a year. So there’s always that!….)

They just pop out. I’ll go through a spell where i’m just content to play the songs I have, and run scales and exercises on my guitar. and then one day. A song is born.

and there are lots of half songs, quarter songs. Lines, Ideas. Most of which never get finished. But some days whole songs just pop out.

and it’s the craziest damn thing. 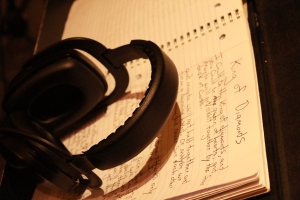 They just come when they come.

Who knows where they come from? It’s the craziest thing